Please subscribe to keep reading. You can cancel at any time.
Already a subscriber?
Log in or Activate your account.
Loading&hellp
No thanks, return to homepage.
×

Please log in to keep reading.
Enjoy unlimited articles at one of our lowest prices ever. {{featured_button_text}}
You have permission to edit this article.
Edit 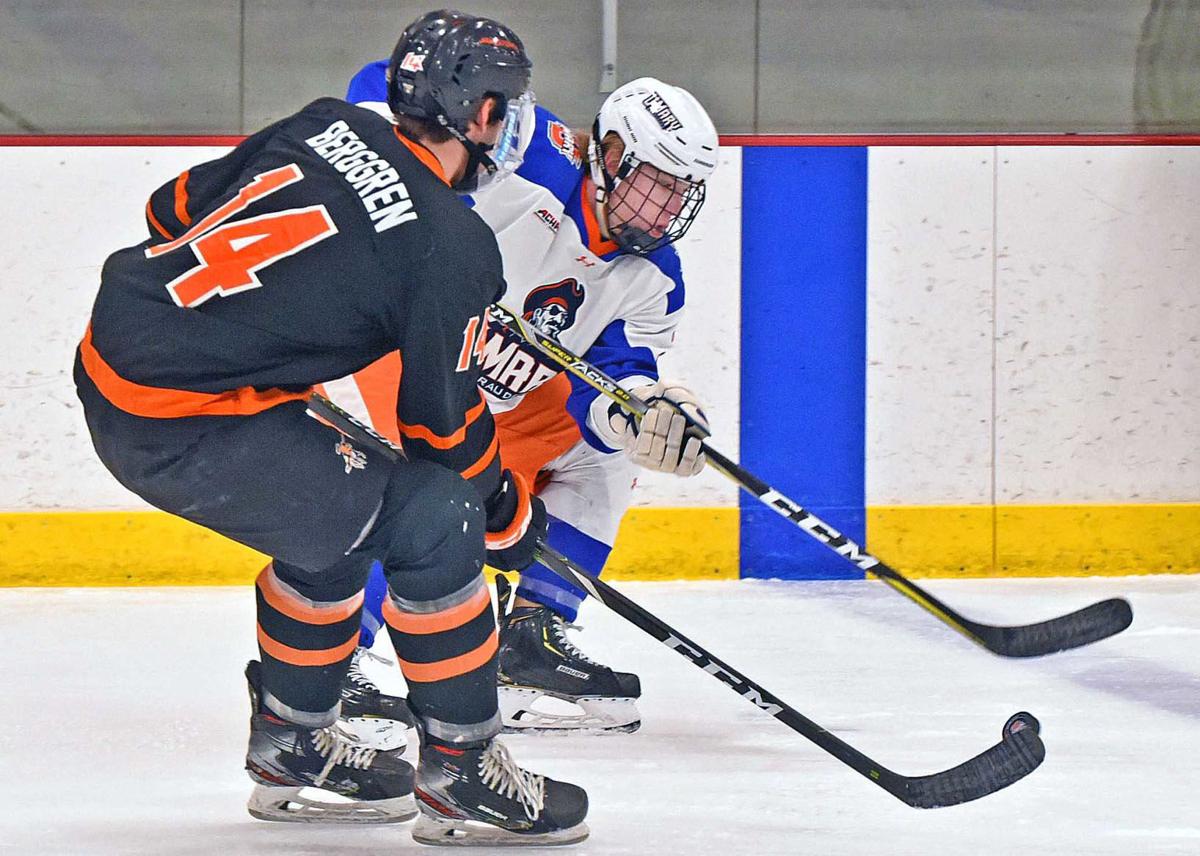 The University of Mary's Drew Lenertz, right, and the University of Jamestown's Logan Berggren eye the puck during Wednesday night's game at Starion Sports Complex in Mandan. 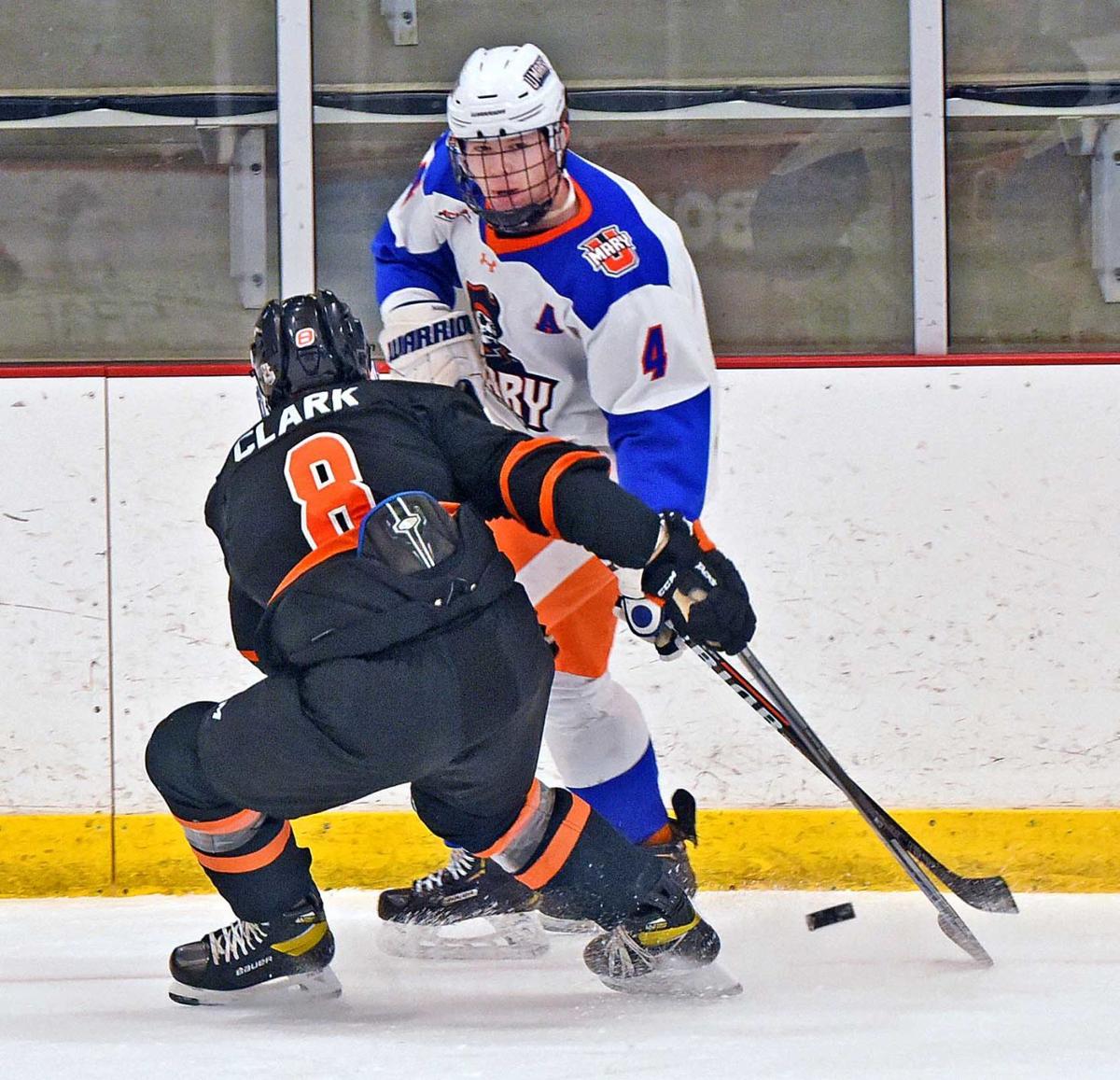 The University of Mary's Marshall Tschida (4) looks to pass the puck as Jamestown's Andrew Clark (8) defends during Wednesday night's game in Mandan.

Tyson Brouwer made sure home ice wasn’t an advantage, again.

The University of Jamestown senior goaltender gave the University of Mary trouble all night, especially early on, as the Jimmies posted a 7-2 victory on Wednesday night at Starion Sports Complex in Mandan.

“Every time we play against them with Brouwer in the net, he’s just a good goaltender,” Marauders coach Dan Huntley said. “He held them in there in that first period. He didn’t give up a lot of rebounds, so we were taking shots and we got a lot of them but we didn’t get things in tight and when we did, he covered them up and didn’t give us a second opportunity.”

The Jimmies’ ACHA Division I team handed the ACHA Division II Marauders their first setback of the season and in doing so kept alive a strange streak. The two teams have squared off 11 times, and neither team has picked up a win at home, including U-Mary’s 4-1 win in Jamestown on Saturday. The teams skated to a 4-4 tie in Mandan earlier this season.

The Marauders outshot the Jimmies 20-6 over the first 20 minutes, but Jamestown took a 2-0 lead as Brouwer was stymieing the U-Mary offensive attack. The Lethbridge, Alberta, native stopped 43 of the 45 shots he faced.

Tyler Chavez-Leech scored twice in the first period for Jamestown. A rebound goal at 1:20 got the visitors an early lead, and he added a second goal off assists by Jordan Popoff and Andrew Clark at 13:44 for a 2-0 advantage.

Carter Johnson scored on the first shot of the second period, scoring 4-on-4 as a U-Mary penalty expired 16 seconds into the period.

About nine minutes later, the Jimmies made it 4-0 as Reid Wilson scored right after a power-play expired.

“Our defensemen as a whole didn’t play great tonight, we got beat on some rushes but we also made some poor choices in the neutral zone when we didn’t have forwards in the right spots and took some chances but you know, we’re still a pretty good team,” Huntley said.

“They’ve got nothing to bum out about with losing to a Division I team. At the end of the day, we’re 5-5-1 against these guys and nobody’s won at home. It’s hard to believe we’re 11 games in and nobody’s won at home. Never seen anything like it before. We’ll be ready on Sunday. We’re going to be rested, they’ve got two games with Minot this weekend, so I’m hoping that they’re going to be tired and beat up and we’re going to go in there fresh and be ready to take that one on the road.”

Justin Ohnstad got the Marauders on the board at 10:57 of the second, and Tanner Eskro cut the deficit in half on a point-blank shot from in front that beat Brouwer high on the stick side to make it 4-2 31 seconds later.

But the Jimmies countered, as Logan Berggren and Greg Susinski scored 1:02 apart later in the second, making it a four-goal cushion again at 6-2.

Quin Garrison added a shorthanded goal in the third period for the Jimmies (3-2-3).

The Marauders have been dominant at Starion, but they haven’t found a way to solve the Jimmies.

“I think against D-II teams we’re 43-1 or something. It’s crazy – this is a great home for us and we just can’t get their number,” Huntley said. “They play well. Tonight was a little different game than the other night or a month ago when we tied 4-4. Tonight was more physical, you have to play through that. Both teams did a great job on the penalty kill. They got one power play goal out of I haven’t even seen how many penalties we had to kill tonight, but it was a lot, so we’re pretty good in that area and that’s one thing we can point at tonight.”

The Marauders will get another shot at the Jimmies -- on the road -- this weekend.

“It’s kind of like three years ago, when we went into Minot,” Huntley said. “We were like 24-1 and we thought we were pretty good and they beat us 8-1. It really put us back in our place and then we came back and re-evaluated, we tied the next day 1-1 and then we went on and won 13 or 14 games in a row.

“We’ll find out what the mentality of our team is pretty quick, to see how they respond and what their thoughts are on losing. We have to learn to be humble, too. We’ll figure it out. You can be disappointed for a night, but that’s it for this one.”

The two teams square off again on Sunday at 6 p.m. in Jamestown.

Be the first to know

Get local news delivered to your inbox!

Related to this story

Marauders work around COVID-19 issues not of their own making

COVID-19 sunk its claws into the University of Mary women’s basketball team's season early in 2021.

Experience — in spades — has helped the University of Mary hockey team navigate an uncertain season.

When practice begins Jan. 22, the Bison football team will have a new coach on staff.

Alabama wins college football title. Are you surprised? Get a recap

Top-ranked Alabama beat No. 3 Ohio State 52-24 to win its sixth national championship under coach Nick Saban. Here are the highlights in photos.

No. 1-ranked St. Cloud State won decisively on the scoreboard, but the University of Mary put up a respectable showing Thursday night.

Despite all the hurdles, CFP title game has arrived with No. 1 Alabama taking on No. 3 OSU in Miami

There was a point in August where having a season appeared to be greatly at risk, let alone reaching the College Football Playoff national championship game.

The University of Mary's Drew Lenertz, right, and the University of Jamestown's Logan Berggren eye the puck during Wednesday night's game at Starion Sports Complex in Mandan.

The University of Mary's Marshall Tschida (4) looks to pass the puck as Jamestown's Andrew Clark (8) defends during Wednesday night's game in Mandan.

Get up-to-the-minute news sent straight to your device.